By Richard Ponzio and Cristina Petcu

A year from now, on June 26, 2020, the international community will celebrate the 75th anniversary of the signing of the United Nations Charter. That doesn’t leave much time to hammer out a “concise, substantive, forward-looking and unifying declaration” that captures member states’ commitment to multilateralism and to the UN before the world leaders summit meeting on Sept. 21, 2020 — as the General Assembly resolved this month.

Anniversaries invariably put the UN in a state of reflection, giving it a chance to assess achievements, renew commitments and — where there’s will — strengthen systems and mechanisms for global governance. The UN missed the boat in doing so during its 50th anniversary, in 1995, compelling Secretary-General Kofi Annan to push for the adoption of several new goals, including one aimed at improved peace-building, 10 years later.

Anticipating next year’s soul-searching, the Stimson Center, an international policy research group, and its new Platform on Global Security, Justice and Governance Innovation, put together An Innovation Agenda for UN 75: The Albright-Gambari Commission Report and the Road to 2020, with 20 “global ideas,” including:

Create a strong UN peace-building council to replace the Peacebuilding Commission and give it a conflict-prevention mandate. The new council would supplant the long-dormant Trusteeship Council. It would focus on countries and regions in non-peacekeeping (and especially “post-“) environments. At the same time, situations involving peace operations and avoiding potentially violent rivalries among great powers, such as the United States, China and Russia, would remain the purview of the Security Council. The new peace-building council would monitor and marshal collective action to avert the outbreak or recurrence of deadly conflict and closely track the UN’s system-wide efforts to sustain peace.

Establish a green technology licensing facility in the Green Climate Fund. Leaning on the commitments from the recent Katowice Rulebook, the facility would expand access to critical climate mitigation and adaptation technologies in developing countries while respecting the intellectual property rights of their creators, thereby offering incentives to public-private partnerships in developing green technology worldwide.

Assemble a UN parliamentary network as an advisory body of people’s representatives under UN Charter Article 22. The network would allow members of national legislatures to advise the General Assembly directly on key governance issues, from reducing extreme poverty and combating climate change to nuclear nonproliferation. It would also complement other work to develop a transnational democratic culture, including the European and Pan-African Parliaments’ recommendation to establish a UN parliamentary assembly.

The UN needs to act quickly if it wants to move beyond a simple stocktaking and reaffirmation of multilateral principles at the September 2020 world leaders summit. We urge both the current and the newly elected presidents of the General Assembly (María Fernanda Espinosa Garcés of Ecuador and Tijjani Muhammad-Bande of Nigeria, respectively) to appoint without delay the co-facilitators for the UN 75 political declaration.

Fortunately, many intergovernmental and civil society-led activities scheduled over the next 15 months can feed and reinforce support for creative ideas in the drafting, adoption and follow-through of the declaration and its commitments, as depicted below (source: An Innovation Agenda for UN 75, June 2019): 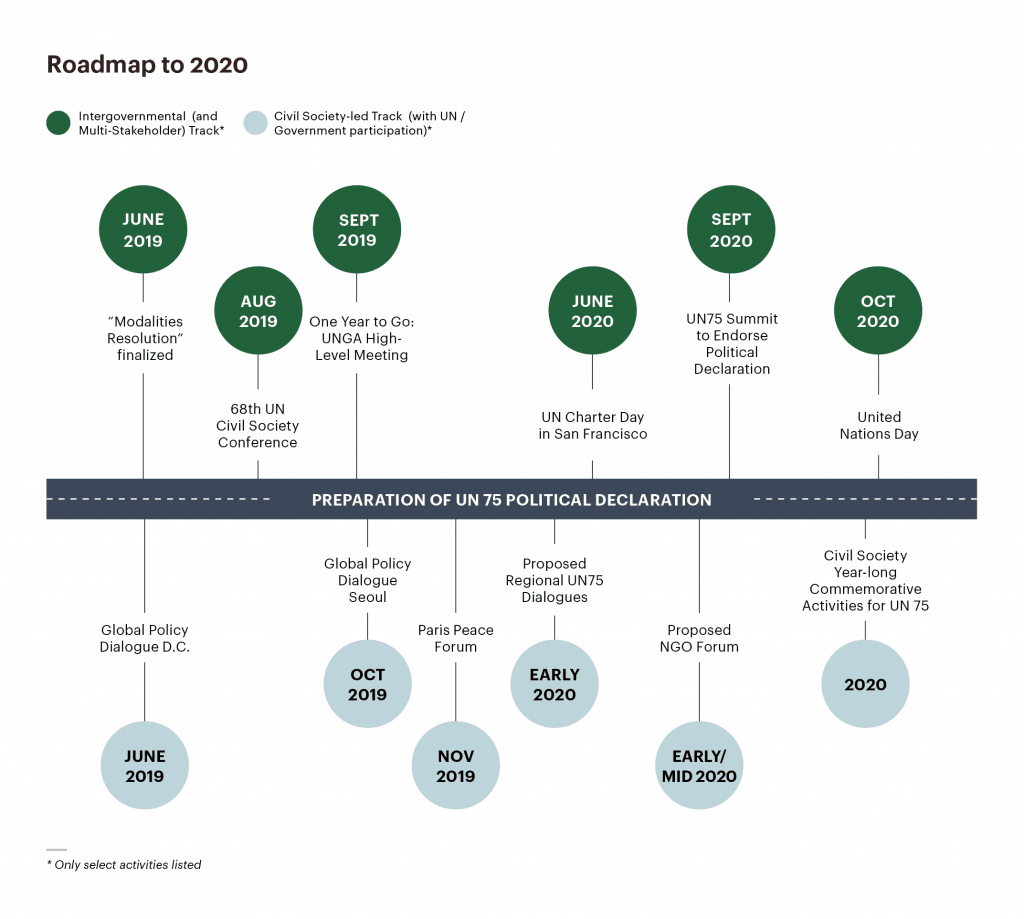 Against the backdrop of rising nativist and anti-multilateralist forces in many parts of the world, smart coalitions of progressive civil society members and like-minded nations — including the UN 2020 Initiative, Together First campaign and soon-to-be launched Alliance for Multilateralism — should treat the UN 75 conference as both a landing pad for some timely innovations and a launching pad for more ambitious reforms that may require more time to mature.

Specifically, the UN 75 political declaration could aim to produce a few easy wins next year, like a new peace-building audit-conflict prevention tool that would use conflict indicators for early warning and action within the UN Peacebuilding Commission. This would help generate momentum at the 2020 conference and build political support for bolder ideas like the peace-building council or the long-elusive expansion of the Security Council.

This week also marks the 100th anniversary of the Treaty of Versailles, when the leaders of nations emerging from World War I inaugurated the Covenant of the League of Nations. America’s failure to participate helped doom the noble, short-lived experiment in collective security, a lesson the US learned not to repeat when the UN was built on the ruins of the war that shattered the League.

Today, far from taking the UN for granted or stepping back from the institutions that the American initiative helped to create, it is critical that the US and other world leaders reimagine and reinvigorate our second-generation world organization to meet the looming challenges of the 21st century.